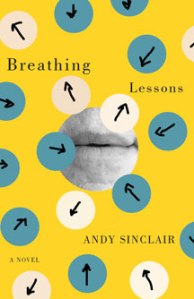 We are all slaves to our desires. But do we surrender to them, ignore them or even become embarrassed because of them? That is one of the major questions of the human condition. And any book that deals with that subject is certainly worth a read. Hence Andy Sinclair’s novel Breathing Lessons is a engaging read.

In the summers when I was a teenager we lifeguarded at the beach, which was a pocket of land cut out of the forest. The sand was trucked in. the lake water wasn’t polluted but it was smelly and brown from all the mulch. Nowadays people would call it organic. It was the kind of water that people from cities think is gross but if you poured it into a cedar-lined bathtub and lit a few pine-scented candles and advertised a Northern Waters Spa Experience, you could make a lot of money from those same people.

In the mornings the shadflies crunched underfoot as we swept them off the dock. Thursdays we came early for in-service training. We practised searching for lost kids, hauling unconscious people out of the water, splinting fractures. We did artificial respiration on each other, and there were no masks or resuscitation bags. If you played the victim, you had to let all your air out, and Becky, our boss, had to see your lungs expand when your rescuer breathed air back into you.

That was the summer a lifeguard in another town died when she got caught in a pool drain.

The story deals with Henry Moss. We witness all sorts of fumbles and failures as Henry tries to deal with his homosexuality. He tries hard to find a lasting and endearing partner but those he connects with are fleeting. As the book goes on, Henry ages and his desires change, but he is still lonely. Sinclair does an excellent job in describing those feelings and emotions for us to read.

“After you have kids,” my mother says on the phone, by way of explanation for this thirty-two-year-old who has caused her hair to whiten prematurely and used up a good deal of my parents’ money in rehab and probably brought them a good fifteen years closer to death, “there comes a certain maturity.”

My mother: ‘Oh, honey, your father and I just love you.”

I guess I would have had kids if I’d been straight., But I’m not, and I’m also not an assimilationist. Also, after rent, the car, and various fucking-around sundries there’s not much left over, certainly not enough to pay for diapers.

“But you do it together with someone,” Jeff says. Like who? I’ve only had one real relationship that lasted beyond a couple of weeks, and that one was with a manic-depressive. It only hung on because the prospect of leaving seemed so exhausting. Anyway, everyone used to say you couldn’t be gay and have a kid, because that was irresponsible and confusing and would fuck it up. It’s okay if you want to be that way but you shouldn’t be imposing that on someone else. Even my mother would have agreed with that, then. Now they’ve changed their minds, they think homos are so loving and gentle and nurturing. But I’d read some Thomas Kuhn in the interim, and I know they might take it all back. Besides, the gays had it right before, when they lived on the margins. Now it’s different – we’re just like everybody else! Except we’re really, really into cock. We’re not supposed to slut around on the internet or at the tubs, though. Or talk about it.

The language is frank and bold at times, but it reflects a reality many people exist in today. We get a clear sense of Henry’s thoughts and confusions and feel for him. We see the errors that he makes in judgement at times and realize that we ourselves have made similar errors in our own lives. The book is a brilliant read to reflect and ponder one’s own life upon no matter what preferences one has.

Brian and I return with the steaks and beer. We had a bottle each in the car on the way over. It’s probably a dumb thing for a cop to do, but it’s a small-town force and Brian is popular with the other officers. He’d probably wink his way out of it if we ever got pulled over. He’d ask them if they wanted to go fishing next week.

We got up to a lot of shit together after we’d first met – firecrackers in mailboxes, naked cliff-diving, four-hour drives to Sudbury to go drinking and dancing. We’d drop acid and go bowling, watching in awe as the ball oozed its way towards the pins. It was the beginning of the end of my swimming days but I didn’t care. I had man love for him because he was such a hooligan but there was another kind of love there, too. One that I didn’t want to think about. Brian fucked a lot of girls and when I told him I was gay he was more than supportive. I was seventeen and terrified. It wasn’t a big city. It was the rural north and this was before it was an in-joke on every other sitcom.

“You’re my best friend,” he said, and he hugged me. that was more comfort than I had ever felt. He told me nobody would bug me as long as he was around. The danger was real then. You wouldn’t get lynched or anything, but they’d beat you up if they found you behind the arena. Still, I maybe should have gone it alone.

Breathing Lessons by Andy Sinclair is not a easy or a light read. But it is a worthwhile one. It looks at the concept of desire and how it is acted upon, giving insight to the human condition. A great book.