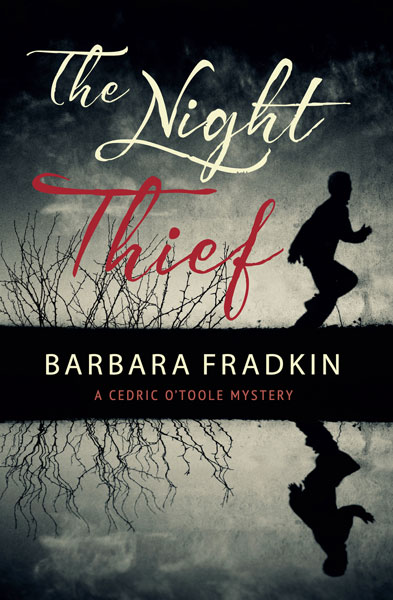 There is a certain beauty in brevity when one writes a narrative. To keep things simple and yet to keep the attention of a reader is a difficult challenge. Barbara Fradkin manages to do that with a certain grace with her novel The Night Thief which makes this book not only a quick read but also an interesting one.

It was supposed to be a perfect October night. The moon was huge and the sky was so clear. I could see all the way across the field to the woods.

But after less than an hour, I was freezing to death. My toes had gone numb. My back ached and I couldn’t feel the tip of my nose. Good move, O’Toole, I grumbled to myself as I eased my stiff fingers from the shotgun. You couldn’t wear a warmer jacket?

I was lying in wait for the night thief. for more than three weeks now, I’d been trying to stop him from raiding my vegetable patch. My usual scarecrows and whirligigs had been useless. So first I’d welded together a tall fence using every piece of metal I could spare. Bits of car hoods and chicken wire. it wasn’t pretty, but I thought it would do the trick.

I have read several of theses “Rapid Reads” series and have always found them entertaining in some way. This book is no different. They service a need for a certain type of reader who may have limited reading skills or just wants a quick book to read over a short time. The writing here is light and breezy without being condescending or childish. The story deals with Cedric O’Toole. Something appears raiding his farm and he is determined to find out what it is. Oddly enough it is a boy who appears to be homeless. Cedric’s own past doesn’t trust outside authorities to take care of the boy, but as the story goes on, he must decide to get help for the boy or trust his own instincts.

By the time we got back to the farmhouse, sunset had stolen all the heat out of the air. I was shivering. Robin trailed about twenty feet behind me, but when he saw the house, he stopped to stare, like he’d never seen it in the daytime. Now, I admit my house is a funny sight. Two walls are painted turquoise and the other two orange, because that’s what was handy. Both paints were rejects from someone else’s bad mix jobs – kind of like me.

At first Robin wouldn’t even come up the front steps. Instead he headed for the barn, sending the hens squawking in all directions. So I told him I was going inside to feed Chevy, and soup would be ready in a few minutes. When I peeked outside again, he was down by the barn, feeding the hens. I could see him smiling at them, but when I called to him, the smile disappeared.

Even when my mother had remembered to feed me, she was never much of a cook. So early on I’d figured out how to use a stove and grow a few vegetables. My soup wasn’t fancy but the smell was enough to get Robin inside the house. He took the bowl off the table and curled up on the kitchen floor beside Chevy. He emptied his bowl even faster than the dog would have. I put a refill on the the table, be he took it down onto the floor too.

“Where are you from?” I asked.

There is also some deep feelings, thoughts and emotions here. Fradkin has obviously captured some scenarios from her work as a child and school psychologist into this story, making it a great piece of literature by giving insight to the human condition. The ending isn’t at all a ‘happily-ever-after’ one but one one that reflects reality. Bittersweet yet life continues.

I studied the drawings carefully, hoping for a clue to his past. There was only one, a small, one-story, house that looked nothing like mine. It had a front porch with what looked like a rocking chair on it. It wasn’t much, but it was a start. Was it time to tell Jessica the truth? And get this kid back home with some real help?

Instead, I stalled. I admit, I kind of liked his company – and his help. I had a busy couple of days paneling the living room in a cottage near the village. so Robin was left to do the chores and keep himself busy. He spent hours in my junk sheds, fiddling with things. He played with Chevy and the goat, even enjoyed watching the hens. But he hardly talked. Every night I put him to bed in my mother’s bed, and every morning I found him asleep in the shed. He ate like a football player, but during the night food still disappeared. Not only food, but my mother’s sweaters, more towels and spare cushions from the couch.

So one night I woke up at 2:00 AM and went to peek in my mother’s room. Sure enough, the bed was empty. I peered out the window. The moon was on the wane but still cast enough pale light that I could see a shape running toward the woods. Toward the mystery cave I had found a few days earlier.

What the hell was this boy up to?

While it is a light and ‘rapid’ read, The Night Thief by Barbara Fradkin is an engaging one. Filled with emotion and suspense, it is a read that engages for whomever reads it.

Link to Orca Books’ page for The Night Thief